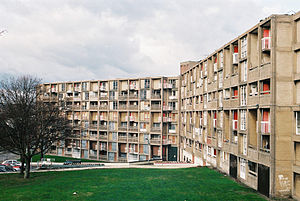 Join us for a talk with Owen Hatherley, entitled ‘Are the Ruins Really Ruined

The increased currency of the notion of Ruins
over the last decade or so in art, architecture and theory has frequently focused on the notion that an entire era – roughly speaking, of the ‘post-war consensus’ in one part of Europe and ‘real socialism’ in another – is so comprehensively ended that its physical remnants resemble those of a vanished civilisation. To what degree is this actually true? In terms of actual inhabitation, many of the places considered to be ruins or remnants are actually wholly used, and exist in the genuinely very different circumstances of neoliberalism. What does it mean to class somewhere that people live as a ruin? For those who want to try to continue the social projects that these ‘ruins’ represent, is their presentation as romantic relics a help or hindrance?

Owen Hatherley received his PhD from Birkbeck in 2011. He writes regularly on architecture and cultural politics for The Guardian, The London Review of Books and other publications, and is the author of several books: Militant Modernism (Zero, 2009), A Guide to the New Ruins of Great Britain (Verso, 2010), Uncommon: An Essay on Pulp (Zero, 2011), A New Kind of Bleak: Journeys through Urban Britain (Verso 2012), Landscapes of Communism (Penguin 2015) and The Ministry of Nostalgia (Verso 2015).