This discussion brings together people to speak to both the legacy of Comedia’s publication ‘What a Way to Run a Railroad: An analysis of radical failure’ as well as the challenges facing contemporary alternative media. Contributors to the event include: 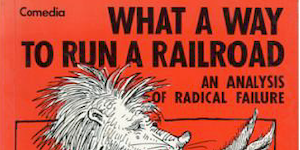 Thirty years ago, a small arts and media consultancy, Comedia, published an assessment of alternative media, What a Way to Run a Railroad: An Analysis of Radical Failure, in which the authors identified obstacles that were preventing newspapers, magazines and distribution projects from reaching out beyond the ‘radical ghetto’. While acknowledging that external obstacles played a role in the closure of many of these initiatives, the analysis highlighted internal factors that also contributed to ‘radical failure’. These included such aspects as the dominance of prefigurative politics over organisational functioning and planning, the lack of professional administrative and financial skills, and the failure to develop a clear sense of target audiences and to use marketing to reach new audiences.

In 2015, how has the situation for alternative broadcasting and publishing changed? What kinds of challenges face critical media projects to overcome their silos, reach out to broader publics and become sustainable organisations? Do alternative media face the same obstacles today as 30 years ago?

For example, if the growth in the accessibility (costs and skills) of new digital technologies and social media platforms appear to have ‘solved’ a number of obstacles that impeded alternative media and cultural production in the 1970s and 1980s, why does it appear that dominant media continue to be able to set the political agenda? If the ability to produce print, audio-visual or electronic media and cultural programming to professional standards is widely available, why are marginalised voices still ‘marginalised’? Has the proliferation of social media platforms solved the problem of ‘access’ for subaltern voices to speak ‘truth to power’? How are current initiatives embracing, rejecting and/or reforming the drive for efficient, resilient forms of management whilst addressing issues of internal democracy, collectivity and participation?

Have the new digital technologies enabled different forms of communication to overcome some of the causes of ‘radical failure’, such as the dominance of prefigurative politics that Comedia raised in 1985, whereby new media appear to enable the rise of ‘leaderless movements’? Yet, corporate and state media continue to dominate to set the agenda for debate and these same social media platforms would appear to help circulate their programmes to a broader public, including amongst the marginalised.

Three decades since the publication of WAWTRAR in 1985, this discussion event asks what internal and external factors face alternative and radical media today? There is a proliferation of relatively accessible digital media enabling professional standards of cultural production and even aspects of distribution networks enabling yet a further reach to a greater amount of people than ever before.  What, then, prevents radical and alternative media from overcoming their limitations to have a greater impact on society?

This event is free, but booking is required at Eventbrite.